“Molly Malone” (also known as “Cockles and Mussels” or “In Dublin’s Fair City“) is a popular song set in Dublin, Ireland, which has become the unofficial anthem of Dublin.

The Molly Malone statue in Grafton Street was unveiled by then Lord Mayor of Dublin, Alderman Ben Briscoe, during the 1988 Dublin Millennium celebrations, when 13 June was declared to be Molly Malone Day. The statue was presented to the city by Jury’s Hotel Group to mark the Millennium.

On 18 July 2014, the statue was relocated to Suffolk Street, in front of the Tourist Information Office, to make way for Luas track-laying work to be completed at the old location. Due to the increase in tourist foot traffic, and a common penchant for being “handsy”, the statue has been groped often enough that the bronze hue has begun to wear off on the bosom. 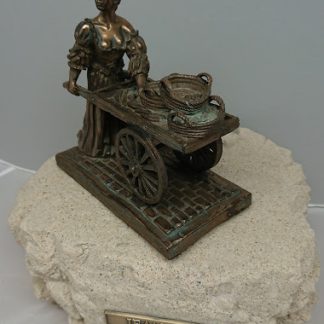